California Libertarian's Victory Could Be a Roadmap for Others

This article about victorious Libertarian candidate Jeff Hewitt was written by Steven Greenhut:

Winning candidates need to offer practical approaches that are appropriate for the offices they are seeking. Jeff Hewitt did exactly that.

Many of my Republican friends chide me for being a "Losertarian," a member of a party, the Libertarian Party, that is far better known for its sometimes-bizarre candidates, bitter internal disputes and unrealistic policy positions than it is for winning elections. Never mind that the GOP has its share of strange candidates (including one who managed to win a presidential election), but the criticism always has had an uncomfortable ring of truth to it.

So it was with much enjoyment that I watched Libertarian candidate Jeff Hewitt certified as the winner of a seat on the Riverside County Board of Supervisors. In an election that saw Republican candidates obliterated for statewide and legislative seats, it was unusual seeing a Libertarian win a powerful office in one of the nation's most-populous counties. These races are "nonpartisan," but Calimesa Mayor Hewitt never hid his party affiliation. He beat a well-known Republican former Assemblyman.... read the entire article here: California Libertarian's Victory Could Be a Roadmap for Others

Steven Greenhut is western region director for the R Street Institute and was previously the Union-Tribune's California columnist. He is based in Sacramento.

If  you've not already heard, I have some very exciting news. Jeff Hewitt, California's Region 4 LNC Representative and longtime Libertarian activist, won his election for Riverside County Supervisor! The Riverside County Registrar of Voters certified the election just before the deadline of December 6th, and announced the results on December 7th, that Hewitt won by a margin of 3.8% and now will hold a position that represents almost 2.5 million residents in the 11th largest county in the United States.

This week holds two anniversaries worthy of note that Libertarian Party members should celebrate and publicize.

Today, Dec. 11, marks the 47th anniversary of the founding of the Libertarian Party in 1971. It was on that day that David F. Nolan gathered with other libertarians in Colorado Springs to declare that it was time for a new political party devoted to defending liberty and to restricting government to its only legitimate purpose: protecting the rights of its citizens.

Since that day, the Libertarian Party has become the third-largest political party in the United States. The LP is the only political party with a core mission of defending individual liberty, promoting personal responsibility, and protecting the right of people “to live in whatever manner they choose, so long as they do not forcibly interfere with the equal right of others to live in whatever manner they choose.”

During these 47 years we’ve laid groundwork for Libertarians to be elected, change public policy, reduce the size and scope of government, and increase the extent of liberty and responsibility in the United States. The extraordinary efforts of our members have made the LP into the only party (other than the Democrats and Republicans) that regularly achieves ballot access throughout the country. These accomplishments have been achieved in the face of tremendous burdens (e.g., discriminatory ballot access and campaign finance laws).

This year, 53 Libertarian Party candidates won election to public office; each of them is now in position to help protect the life, liberty, and property of those they serve.

Soon after the LP’s birthday anniversary is “Bill of Rights Day” on Dec. 15, which marks the 227th anniversary of the ratification of the Bill of Rights in 1791 as part of the U.S. Constitution. During the debates concerning ratification of the Constitution, many citizens argued persuasively for inclusion of amendments that would explicitly provide protection for important rights, to guard against violation of those rights by the federal government.

The Bill of Rights is one of the most powerful, inspiring statements about the principles of individual liberty and limited government in history. When Americans are asked about the aspects of America that make them most proud, frequently their answers include the rights of freedom of speech, freedom of religion, and freedom of assembly. The common element of these answers is individual liberty and freedom from government interference.

Unfortunately, from the moment the Bill of Rights was ratified, there has been an incessant effort by politicians and government functionaries to abridge our rights. Indeed, many of those rights have been effectively eliminated by unconstitutional legislation, judicial misinterpretation, and bureaucratic edicts.

Libertarian Party members and supporters should recognize both of these dates by proclaiming that, for nearly a half-century, the Libertarian Party has proudly and resolutely promoted the principles of individual liberty and personal responsibility, and that elected Libertarians have worked ceaselessly to protect the inalienable rights of the people.

The Jefferson Area Libertarians, the local Libertarian Party of Virginia affiliate of which I have the honor of serving as secretary, will conduct our annual “Bill of Rights Acclamation” on Dec. 15 in Charlottesville, Va. Our “Acclamation” will include speeches about the importance of the Bill of Rights, along with a public reading of the Bill of Rights and its preamble. I encourage my Libertarian Party colleagues to organize similar events and publicize the extent to which our liberty is under increasing attack.

I wish my fellow members and supporters of the Libertarian Party a very happy birthday and many happy returns; please accept my thanks for your efforts to help the United States become truly a land of liberty.

I know that the election is only 10 days away and that's where everyone's mind is at as we have several exciting campaigns in the state, which include:

We also have some incredibly exciting non-partisan races which include Jeff Hewitt for Riverside County Supervisor, 5th District (https://www.votehewitt.com/), Aaron Starr for City of Oxnard Mayor (https://www.starrforoxnard.com/), and John Inks for Mountain View City Council (https://www.electinks.com/); all are strong Libertarians who have a great chance of winning!

It's not too late to support these candidates, as there are still several last minute expenses, so please give if you can! 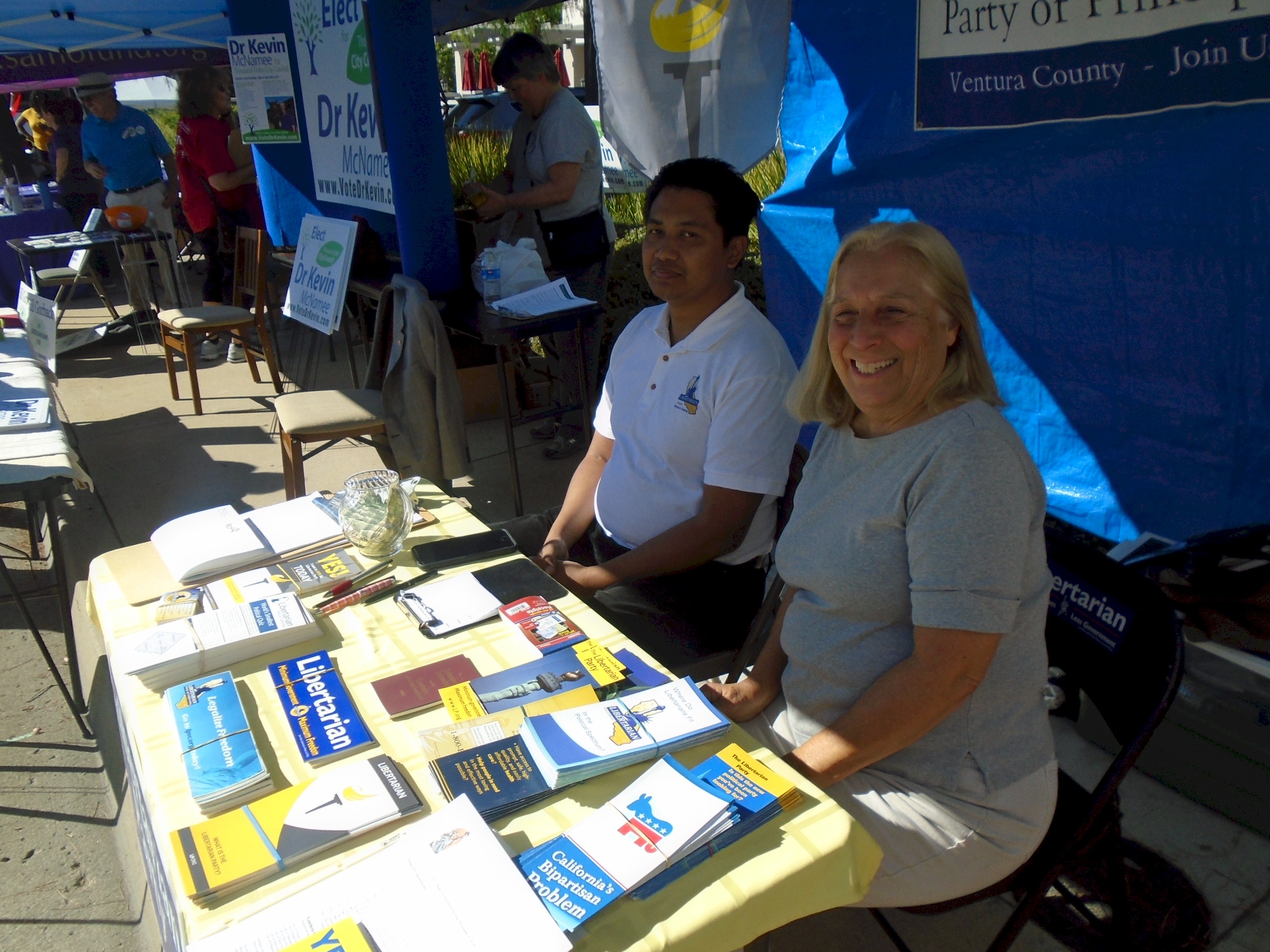 Planning for the 2019 California State Libertarian Party Convention is well underway and early-bird pricing is being offered right now until October 31, 2018. This year the convention will be held in the northern part of the state. The date is set for April 5-7, 2019 and the location will be the Concord Crowne Plaza, 45 John Glen Drive, in Concord, CA 94520. If you are interested in attending or signing up, find more details on the state website at www.ca.lp.org

Business Access - Free for Delegates (must be member)
Full access to business floor and any speakers on floor.

Spreading Our Message at a Local College Forum 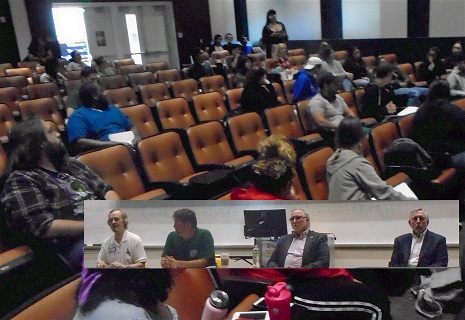 The Political Science Club of Ventura College held a political party forum on October 10th, with representatives from the Libertarian, Republican, Democratic, and Green Parties. More than 50 students attended the event, organized by Michela Lee, club president.
LPVC Secretary William Westmiller gave a 15-minute overview of party history and positions, followed by a lengthy Q&A session that covered a wide range of current political issues. The LP and Green parties offered tables of literature and information. Westmiller distributed a list of positions that LPVC has taken on state and local ballot propositions.

The event is held annually. Last year, Westmiller and LPVC Chair Robin Westmiller were the only panel participants. This year, county chairs of the GOP, DEM and Green parties also participated. Questions from students largely avoided hot topics like the Kavanaugh confirmation and Trump's style, focusing on issues like immigration, drug laws, foreign wars, and general party principles.
Opportunities like this are vital for our Party to grow, especially among young people. If you would like to participate in future outreach events, please let us know by clicking on the volunteer button above.
Share

The Yes on 6 State-Wide Tour Bus will be stopping several places along the Coast before the November election. It will be in Ventura County on Saturday October 20. Get up early, grab a friend and be at the Community Center Park in Camarillo (1605 E. Burnley Street) at 8:00 AM for an hour-long rally to repeal the Gas Tax. There will be speakers, including Carl DeMaio, with free signs and stickers for all. Be there to show your support and help get this proposition passed!
P.S. Don't be late because after about an hour it will off to Santa Maria for the next rally.
For registration information goto: Yes on 6 Camarillo
Share

On Saturday, October 6, the Libertarian Party of Ventura County hosted a voter registration booth at the Moorpark Country Days celebration. It was great to get out into the community and hear what people are thinking during these days of political frustration. As we chatted with people of various political views, it was clear that all would like to see some change, and many expressed appreciation for our presence even if they weren't registered Libertarians. 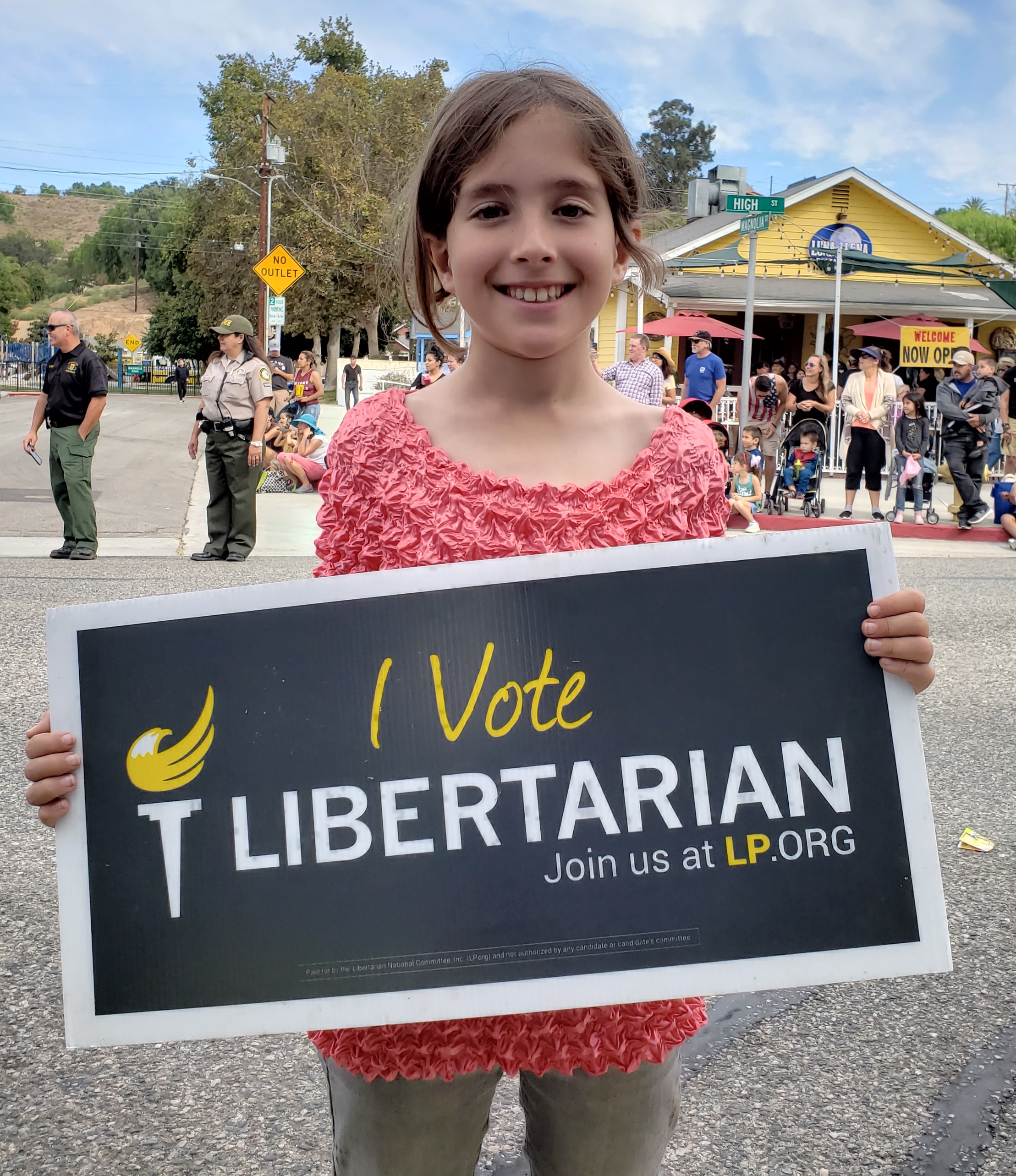 If you're ready help,we will be hosting another booth that the Thousand Oaks Rotary Street Fair on October 21. Follow the link to volunteer. We look forward to seeing you there!

Monday September 17th is Constitution Day! Put up your flag to commemorate the signing of the Constitution by our libertarian founders in Philadelphia on September 17, 1787. Presented to the public on 9-28-1787, it was not ratified by the states until almost a year later on 6-21-1788 when it became effective. This short inspired treatise establishes that government's purpose is to serve its citizens. Let's cherish and safeguard this constitutional republic with the work we do in the Libertarian Party.